September’s Month of Stuff Changed My Life. Here’s How, What, and Why 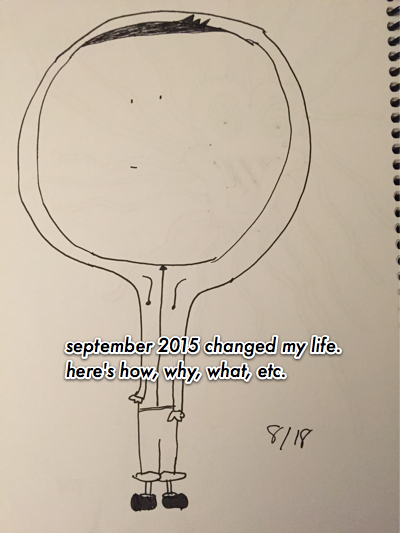 Self Portrait, from August’s month of drawing.

September was an interesting and amazing month. I ended up going rogue again and not blogging about what I’ve been doing until *looks at calendar* October. That’s not the greatest thing in the world, but I still have taken some huge positives out of September’s month of stuff. I didn’t know it or realize it, but September’s project ended up being “Get healthy”. Or “Get better”. You can take your pick.

A lot of the projects I’ve been working on have been a lot of fun — they’ve been projects that have brewed in my brain stew for months if not years. I quickly found that while I wanted to launch a bunch of products, shoot a bunch of videos, and do lots of generally complicated things, I would have more success if I simplified my projects. By  early September, I was feeling like garbage. I needed a complete life reboot. I needed to strip my projects down to the studs and figure out how to get happier and healthier. While I started September wandering aimlessly, feeling constantly cloudy and not “present”, by the end I was feeling better than I have in literally years. And I’m still feeling great.

Here’s how it went down — what I did, why I did it, when I did it, and the things I learned from getting healthy in September.

In July, I got married. It was hands down one of the best days, if not the best day, of my entire gosh darned diddly-do life. There were multiple moments throughout the day when I felt like time stopped. I tried to take a mental picture to never forget how I felt in those moments—I wanted to bottle up those feelings and take a swig first thing in the morning and right before bed every day for the rest of my life. Because in these moments, I felt the purest happiness I have ever felt in the history of Sam Christie.

Of course, the reasons for my happiness were multiple—all of my friends and family coming to celebrate, marrying my dream gal, the meaning behind the ceremony we had, the DJ’s set list was perfect, my dance moves were legit—it all combined into a supernova of jubilation.

So, it wasn’t necessarily surprising, but it was disappointing, when the post-wedding happiness hangover hit. I had been in a funk for a while, just not really feeling great, since well before the wedding. So for August’s month of stuff I took to something I really enjoy—drawing. Doodling to maybe be more precise. 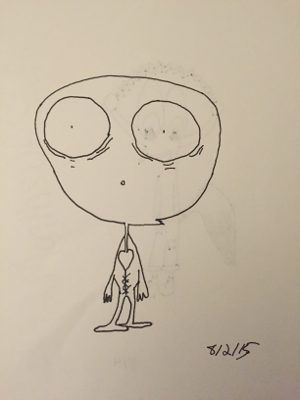 Self Portrait: Me prior to the end of September. (jk, it’s just a weird alien.)

I tried to draw each morning before doing anything else. Productivity experts and all-star doers-of-things like Tim Ferriss and countless others will tell you to start the day with something that is NOT checking your email, or getting sucked into the social media notification trap. Instead, be grateful. Think of or otherwise celebrate the things in your life that are dope. Then set goals for the day—what would make today a “good” day, or a “successful” day. It helps put your day in perspective. I did a bit of that and tried to supplement it by starting the very beginning of my day out with drawing—something that I truly enjoy. By starting my day off with something that made me happy, I was attempting to set myself up for a solid, successful, happy day.

Sometimes it would work, but sometimes I got pulled in other directions. I wanted to draw every day in August, and I did draw a lot, but I didn’t hit my full 31 day goal. I continuously fell into the typical notification vortex. Countless things swirled around in my mind and I couldn’t focus. I’d often spiral in the beginning of the day and end up hating myself for it.

Before the wedding, my wife and I had been talking about “getting healthier”. This is a very nebulous term. What we meant was more specific. Something like this:

1. “We want to have energy instead of feeling lethargic”
2. “We want to eat healthier and plan our meals better”
3. (This one was mainly for me) “I want to be happy more often than feeling stuck, depressed, listless, cloudy, etc”
4. “We want to have rockin’ bods!” (Still working on this one).

We came up with the idea to do the “10 Day Master Cleanse”, and had been talking about it for a while, but we never really followed through or could find time to. 10 days doesn’t seem like a long time, but we had trips to take after the wedding—the honeymoon, visiting friends, family coming to visit (you think I’m going to be sitting out at an all-inclusive honeymoon feast? Don’t think so!). There was never a perfect time for it. But we realized that was an excuse. There’s never a perfect time for anything, whether you want to start blogging, start freelancing, or do a 10 day cleanse! So we made the decision to stop making excuses, and start the damn cleanse!

The gist of the cleanse was this (P.S. Don’t do this without the supervision of a doctor. It’s serious stuff. If you don’t do it right you can mess yourself up permanently. I am not a doctor and I don’t play one on the internet!):

Step 1: Drink a concoction of lemon juice+maple syrup+cayenne pepper+water for 10 days. At night drink a laxative tea (don’t worry, not going into great detail on that one.)
Step 2: On day 11, eat/drink only fresh orange juice. (We ended up throwing 2 oranges in a Vitamix and drinking that. I’m not a pulp guy. Wasn’t too fun but I got through it).
Step 3: On day 12, eat only soup, preferable vegetable. Definitely no meat.
Step 4: On day 13, eat only soup (same veggie one from last night!) during the day, and salad for dinner.
Step 5: On day 14, return to semi-normal eating, but avoid fast food, starchy food, and a bunch of other foods I can’t remember.

Throughout the cleanse, your body is supposed to follow a certain pattern more or less, as it disposes of toxins and runs for 10 days on the good stuff in the maple syrup concoction.

Days 1 and 2 aren’t so bad. I was hungry, but I’m one of those people who eats to live. I don’t live to eat. Although I sure do enjoy a nice craft beer and a food truck burger or taco, I’m not the guy waxing eloquent about the wine and cheese pairing or ordering the lobster quiche. (I had to look up how to spell “quiche” here, which gives you an idea of my culinary prowess).

Days 3 and 4 are the worst. We planned to hit days 3 and 4 around the weekend, which was good because I felt like absolute garbage. I was cloudy, confused, and I felt like a shell of myself. It felt like I had been hit with flu symptoms—the kind that knock you out and make you exhausted.

Around day 5 you are supposed to clear up mentally, and from then on out you are supposed to feel better and better. This was true for me. From day 5 on, I felt sharper mentally, extremely clear-headed, and focused. Of course around this time I realized how much I missed food. The most brutal part of the second half of the cleanse was drinking the same drink for 5 more days. After we were done, we adopted cleaner eating habits and have been trying to eat out less, so as not to slip back into our old routines (and gosh forbid have to do another cleanse 😉 ).

Anyway, what I was most looking forward to at the end of this “experiment”, and the primary reason I wanted to do it, was for the alleged burst of clarity you are supposed get toward the end. I was expecting a glorious epiphany. I was expecting the clouds to part and for all the pillars of my life to align and point me in the direction I was supposed to go. Seriously.

That didn’t happen. But what did happen is much more interesting, and induces less of an eye roll.

By the end of the cleanse I didn’t have to fight myself to be happy. I set into a routine in a very matter-of-fact way that enabled me to do the things I wanted to do and needed to do to have more successful days than unproductive days, and more happy days than garbage days. It’s hard for me to explain why or how this happened, but I’m going to try. I attribute my newfound happiness streak to handful of noticeable changes, obviously brought on by whatever the cleanse did to me or changed in me:

1. I’m no longer mentally cloudy. My mind is very clear. I know the things I have to do for a “successful” day and I don’t have as much trouble doing them or getting started on them as I used to.
2. I’m more certain about things and more confident. I’m quicker to make decisions and the decisions seem obvious, where previously I was constantly hung up on things that caused me to burn out.
3. When I do start to slip into a notification vortex, or I feel a cloud of unhappiness coming over me, I’m able to pull myself out of it. I never used to be able to do this well. Now I can. This is the biggest game changer for me. I feel in control of my life again, and it rules.
4. I’m enjoying things more and appreciating them more. I don’t really know how else to word this at the moment, but think of it like this: When I eat food, it’s not just “okay”, it’s “SOOO GOOD”. When I read a book, I’m not just doing it casually, I’m obsessed with it. Food is bursting with flavor and my favorite Family Guy cutaways are gut-bustingly hilarious and the sky is bluer and you get the picture.

SO although I went rogue this month, barely knew what my month of stuff would bring, and am still getting used to subbing salads for fries, this may be my most important month of stuff yet. 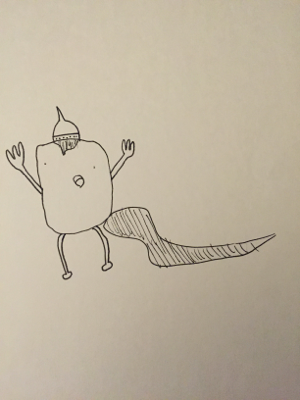 Me at the end of September, super stoked, as some weird squirrel viking

In January, I called 12 Months of Stuff a path “to get to where I want to be”. Around April or May I realized that destination was a bit nebulous. I reworked my future stuffs to directly contribute to my happiness, noticing that I needed some help in that department. And yet I still struggled. Come September, I somehow stumbled upon what feels like a goldmine of good vibes, happy times, and inspiration.

I’m only slightly scared that this happy streak won’t last, but I’m determined to make it last. Now that I feel this good, I don’t ever want to go back to how I used to feel. I don’t know exactly what October’s month of stuff will bring, but I know I’m looking forward to it. And I know this entire year-long endeavor has proved its worth with September’s project of “Getting Healthy”. This has been my most important month of stuff yet.  I’d say it changed my life.

Thanks for reading and for being interested in my journey towards good health (mental and physical), happiness, and rad stuff!